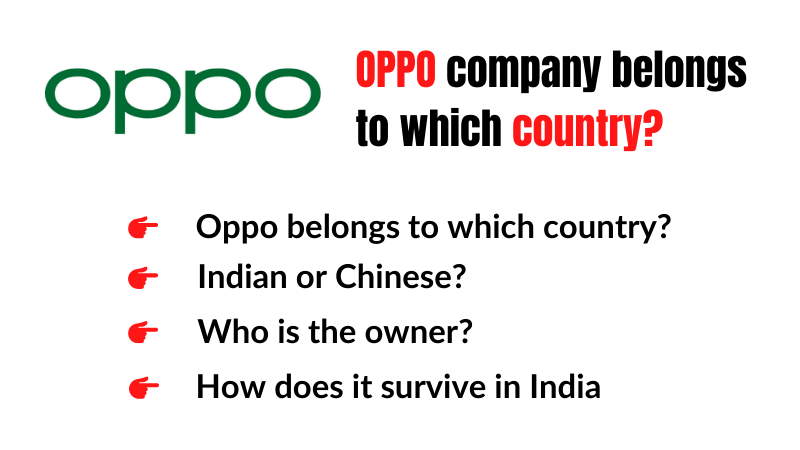 Hey in this article we are going to talk about the top smartphone manufacturing company OPPO. First of all, I want to tell you that OPPO is neither acronym, it is a full word in itself, therefore there is no official full form registered on the name OPPO. Now you will ask the oppo company belongs to which country? Let’s find it –

OPPO company belongs to which country?

Is Oppo a Chinese company?

Yes, Oppo is a Chinese company, because it’s all links belong to China like its headquarter, its parental companies, its subsidiary. About 12% of the business in Inda’s total mobile market is of Oppo. Now the question comes to mind that despite being Chinese, how is it running the business in India. The answer is such that even if it is Chinese, but they have opened their manufacturing factories in India, which provides employment to the local people. This company benefits the country, so the government allows it to do business in India.

The multinational smartphone manufacturing company OPPO was founded in 2001 and launched in 2004 in China. But now OPPO company runs its business in 40 different countries. OPPO company is the subsidiary of multinational electronic company BBK electronic, and in addition, OnePlus Technology Co. Ltd. is a subsidiary of OPPO. OPPO won the India National Cricket Team sponsor’s bid in 2017, which allow their logo to be used on the team’s kit from 2017 to 2019.

OPPO majorly manufacture smartphones, along with this, it is used to manufacture Headphones and Amplifiers, Smartwatches, Power Banks, Bluray-players, and much more electronic gadgets.

One of the special things about OPPO is that its phone offers more features at a lower price. OPPO company’s phone is also known as OPPO camera phone because each of their models has a good camera fit.

Tiki app belongs to which country?

Is BoAt a Chinese company? BoAt company is from which country?