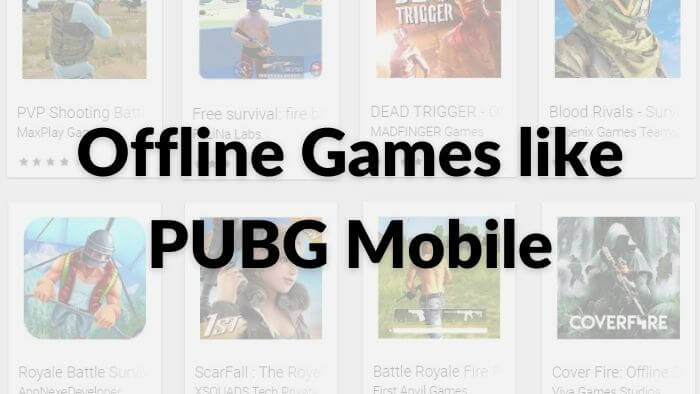 Friends, who do not like to play games nowadays. Whether you are on job or doing business, everyone plays some game these days. In this article, I am going to tell about offline games like PUBG.

I am going to give you a list of 7 offline games like PUBG. Those who have a low-end device or high-end device can be played offline. And all these games are available on the Play Store.

If we talk about offline mode, then this game is also made to play offline. You can play it offline in Single Player mode where you get to play more than 20 exciting offline missions which are updated weekly. You can also play this game online if you want. It can be played in both Single and Multi-Player mode online.

This game is very similar to PUBG Mobile. Many concepts like PUBG Mobile have been used in this game, such as the lobby, airplane landing, outfits, and multiple characters are seen in it. This game has a rating of 4.2 on the Play Store and has more than 10 million downloads, from this we get an idea about how popular this game is. This game will remind you of PUBG. This is a single-player shooting game that plays offline only. What makes this game even more impressive is the environment and grassy land used in it.

So if you want to play any battlefield game just for timepass then definitely try this game. This game takes very little space and gives a very good experience and this game is capable of low-end devices.

If you have played the zombie mode of PUBG Mobile, then this game will give you the same experience. This is a free shooting game in which only FPP mode is available yet and you have to shoot zombies. The game has a rating of 4.5 on the Play Store and has achieved over 50 million downloads.

In this game, you get a map of a city in which zombies are spread all over. And you have to save this city by killing those zombies. There are a lot of weapons available in this game to complete this mission.

This game is also very similar to PUBG. This game can be played offline as well as in FPP mode only. This game is made from the concept of army and commandos, so in this game, you get to see the realistic weapons and vehicles of soldiers. Some advanced features have also been added to this game such as high jump, dynamic weaponry, acoustic armor, and enemy detector.

This is a very good game which is very fun to play. As you can see this game has a rating of 4.1 on the Play Store and more than 1 million people have downloaded it. If you have a low-end device then definitely try this game.

In this game, you have to land by air and have to find guns, health items, and food to survive. The game looks very green which is reminiscent of the Sanhok map. In this game, you can also ride on a horse and this is what makes this game different from other games.

This is a multiplayer battleground game made in India. This game has a rating of 4.0 on the Play Store and has been downloaded by more than 5 million people. This game can be played comfortably on any low-end device.

In this game, you have to jump from the helicopter and land with a parachute. In this, there is a zone like PUBG and you have to survive in this safe zone. This game can be played in both TPP and FPP mode. The game has 100 players play 15-minute matches in Survival Mode and 40 players playing 10-minute matches in Classic mode and 4v4 and 2v2 TDM also available which you can play online.

In this game, you are a soldier and you are called to save people from terrorists. This game has a rating of 4.5 and more than 50 million people have downloaded it on Play Store.

If you like PUBG Mobile lite then you will definitely like this game. You are a soldier in this game and this game will give you a great firing experience. This game is specially for those people who like to play games in TPP mode and in this you can play solo and duo matches. Some advanced weapons have been added to the game such as laser katanas, plasma assault rifles, pistols, and more.

All the above are offline battleground games which are much like as PUBG. If you have a low-end device and PUBG does not play in it, then you should try the games shown above. This game will take very less space on your mobile and will run very smoothly even if your RAM is very low.