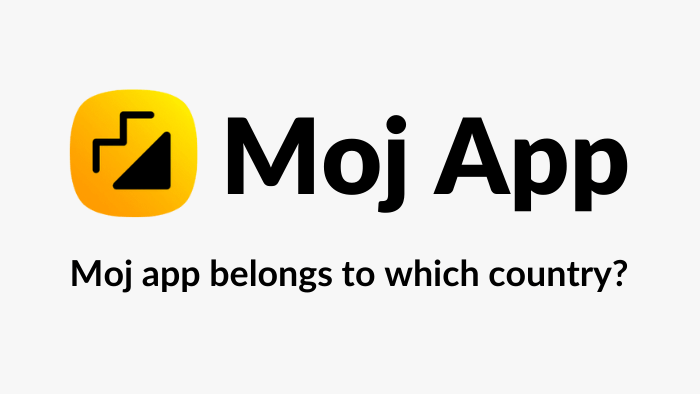 If you are interested in sharing or watching short videos, then you must have heard about the Moj app. But we all have a thought in our mind that from which country the Moj app belongs, so let’s know the answer to this question as well as know who is its owner.

Moj app belongs to which country?

Moj is an Indian short video-sharing social networking service. This is a parent company of ShareChat, which is created by Mohalla Tech Pvt Ltd which is based in Banglore city of state Karnataka.

Last year all Chinese apps were banned by the Indian government. The world-famous TikTok app was also banned in it, so to replace it, the Moj app was launched on PlayStore in June 2020. And since then it remains India’s most popular short video sharing app.

Who is the owner of the Moj app?

As I told you Moj is a parent company of ShareChat. And ShareChat is developed by Mohalla Tech Pvt Ltd. Its headquarter is located in Bangalore city of Karnataka. Ankush Sachdev, Bhanu Pratap Singh and Farid Ahsan are the owner of Mahalla Tech Pvt Ltd.

Is Moj a Chinese app?

Moj is a completely Made in India app and it does not have any relation and link with China. This is India’s own indigenous app made by Indian company sharechat.

There are some special features of the Moj app that makes it different from other apps. In this you can share short videos, to make that video more impressive, there you get special effects and emoticons stickers. Here you get to see videos in different genres like Dance, travel, singing acting, comedy, and education and the duration of these videos is up to 15 seconds to 1 minute. The Moj app is available in 16 different languages and this feature makes it more user-friendly.

You can download this app from Play Store very easily and legally. At present, this app has crossed over 100 million downloads and as it has a rating of 4.2, you can get an idea of how much this app is liked.

Que. Is Moj a Chinese app?
Ans. No Moj is an Indian app.