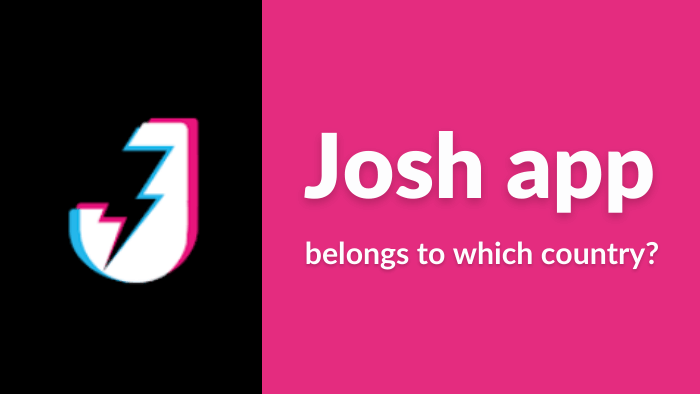 You must have heard the name Josh app. This is India’s topmost musically and short video sharing social networking service. But have you ever wondered from which country the Josh app you are running is belong with? along with this, we are going to know is this a Chinese app? So let’s find out the answers to these questions.

Josh app belongs to which country?

Josh is a completely made-in-India app, where the users can share and download musically and short videos. This app is owned and developed by an Indian company Verse Innovations, which is a parent company of Dailyhunt. And you must know that Dailyhunt made in India is famous as a news aggregator app all over the world.

When TikTok was banned in India along with the Chinese app, many apps were activated to replace it, Josh is one of them. Josh app was launched on 4th July 2020 on Play Store.

Who is the owner of the Josh app?

As I told you Josh app is made by VerSe Innovation, which is a parent company of Dailyhunt and its headquarter is in Banglore, the capital of the Indian state of Karnataka. Virendra Gupta is known as the founder of these companies and Umang Bedi as the co-founder.

Is Josh a Chinese app?

Josh is a completely Indian app made by VerSe Innovation, a company based in India. This app does not have even the slightest connection with China and it does not have any link with any other country.

You can get an idea of how popular this app is by reading the reviews of this app on the Play Store. The app has completed its 100 million downloads with a rating of 4.1. The features of this app are behind getting so much success in such a short time.

Que. Is Josh a Chinese app?
Ans. No Josh is an Indian app.

Is BoAt a Chinese company? BoAt company is from which country?