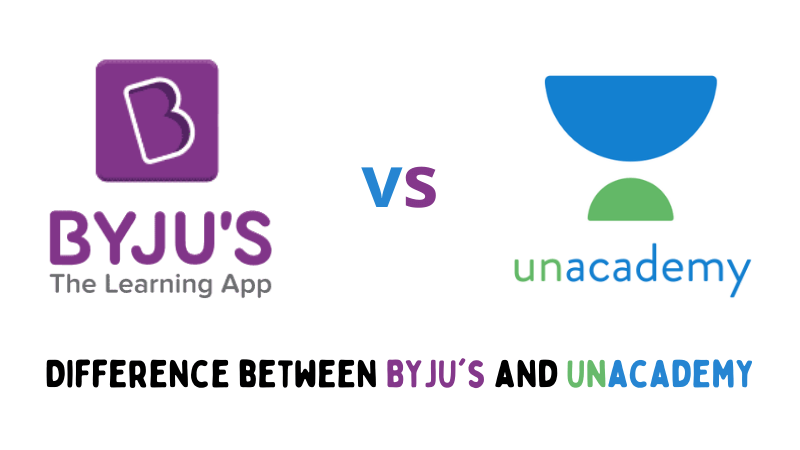 Byju’s and Unacademy are leading online education technology companies in India. In this article, I am going to write about the comparison between Byjus and Unacademy. So if you want to know which company is better between both these, kindly read the Byju’s vs Unacademy further.

BYJU’S vs Unacademy – What is the difference between BYJU’S & Unacademy?

Byju’s is Indian originated educational technology private limited company. It was founded in 2011 and its current headquarter is located in Bangalore, India. Its founders are Byju Raveendrean and Divya Gokulnath.

Unacademy is Indian originated educational technology private limited company. It was founded in 2015 and its current headquarter is located in Bangalore, India. Its founders are Gaurav Munjal, Roman Saini, Hemesh Singh.

Difference between varieties of learning they provide

Byju’s provides Education technology, distance education, M-learning, and much more. It is mainly focused on scholar studies means from standard 1st to 12th.

Unacademy is also an online learning platform and provides Distance education, E-Learning, M-learning, and technological education. It is highly focused on competitive studies.

Difference between the educational area covered by them

Difference between their revenue

The revenue difference between BYJU’s and Unacademy is much more. The annual net worth of BYJU’s for the year 2021 is Rs 24,300 crore, thereas the annual revenue of Unacademy for 2021 is Rs 14,831 Crore. But why is this difference? because as you know Byju’s serves their educational services all over the world, thereas Unacademy covers an area only of India.

Also read | How to earn money with Meesho by reselling products?